Alanqa is a genus of pterosaur from the Late Cretaceous Kem Kem Beds of southeastern Morocco. The name Alanqa comes from the Arabic word العنقاء al-‘anqā’, for a Phoenix similar to the Simurgh of Persian mythology.

Alanqa is the third dinosaur unlocked in the game. The class of dinosaur is pterosaur. It is unlocked by beating battle stage 2, and to get getting it in a common or mystery card pack, or paying 120 DNA.

Alanqa in its cage From Jurassic Park Wikia 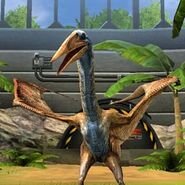 Add a photo to this gallery

Retrieved from "https://jurassic-world-the-moblie-game.fandom.com/wiki/Alanqa?oldid=9692"
Community content is available under CC-BY-SA unless otherwise noted.