Deinotherium ("terrible beast" ) is an ancestor of the modern elephant whose tusks curved downward. It lived from the Middle Miocene to the Early Pleistocene and its fossils were one of the inspirations for some Grecian myths.

The Deinotherium is a Legendary Snow creature unlocked in the game by beating its battle event. Once unlocked, it can be purchased in the Creature Market for DNA 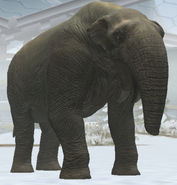 Level 1-10 Deinotherium
Add a photo to this gallery

Retrieved from "https://jurassic-world-the-moblie-game.fandom.com/wiki/Deinotherium?oldid=10485"
Community content is available under CC-BY-SA unless otherwise noted.