Indominus rex was a new attraction in Jurassic World. The hybrid was created by combining the genetic traits of multiple species. Some of the known species that were used in the creation of the hybrid are Tyrannosaurus, Velociraptor, Carnotaurus, Giganotosaurus, Majungasaurus, Rugops, and Therizinosaurus as well as modern animals like cuttlefish, an unspecified species of tree frog, and a pit viper snake. It served as the main antagonist of the film Jurassic World. (From Park Pedia on Indominus Rex)

The Indominus rex was one of the first hybids in the game, it is the third unlocked hybrid. It is created by fusing level 40 Velociraptor and a level 40 Tyrannosaurus rex. The dinosaur was the strongest in the game when the first wave of hybrids was released but now multiple new dinosaurs have surpassed it, with Yudon currently being the strongest in the game, it can be used to create Indoraptor by fusing it with 4,000 Velociraptor DNA.

Tips for this dinosaur.

Because this dinosaur should be useful to you in late game, you would be spending lots of DNA to make a powerful carnivore. In fact, this is one of the dinosaurs you should rely on.

Indominus is also a bargain hybrid if you played hundreds of hours into this game. He should be fused into Indoraptor for the best stats it could possibly get to. 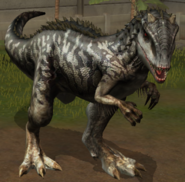 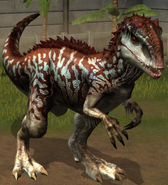 Indominus rex eating
Add a photo to this gallery

Retrieved from "https://jurassic-world-the-moblie-game.fandom.com/wiki/Indominus_rex?oldid=10365"
Community content is available under CC-BY-SA unless otherwise noted.