Labyrinthodontia is an extinct amphibian subclass, which constituted some of the dominant animals of late Paleozoic and early Mesozoic eras.

Labyrinthodonita is the second amphibian unlocked in the game after limnoscelis. Also, it is the tenth unlocked dinosaur. Because of its class, use a level 30 to 40 Labyrinthodonita to take on common or level 20 rare dinosaur. The dinosaur cost 130 DNA, and the ranks is a common dinosaur.

What is important about this dinosaur?

This dinosaur is important as a early game amphibian. Very great at facing off carnivores while also pretty cheap in early game. But what is so special? It will be one of your very first hybrids you will unlock in this game. And this hybrid is going to help you a lot starting from mid-game where you now advance to super rare dinosaurs. 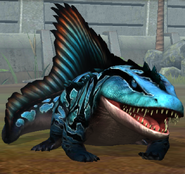 \Labyrinthodontia in the Hatchery
Add a photo to this gallery

Retrieved from "https://jurassic-world-the-moblie-game.fandom.com/wiki/Labyrinthodontia?oldid=10346"
Community content is available under CC-BY-SA unless otherwise noted.