Megatherium ("great beast" ) is the largest known ground sloth. Due to its size, adult Megatherium had few predators; ground sloths as a general group were able to thrive even after the Great American Interchange, when species from North America migrated down into South America and began to outcompete the native fauna.

The Megatherium is a Legendary Cavern creature unlocked in the game by beating its battle event. Once unlocked, it can be purchased in the Creature Market for DNA 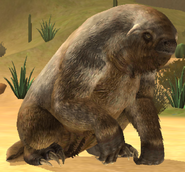 Level 1-10 Megatherium
Add a photo to this gallery

Retrieved from "https://jurassic-world-the-moblie-game.fandom.com/wiki/Megatherium?oldid=10522"
Community content is available under CC-BY-SA unless otherwise noted.