Phorusrhacos longissimus is an extinct prehistoric bird and the only species found from the genus Phorusrhacos. It was a huge carnivorous bird without flying ability. P. longissimus lived in current Brazil and Patagonia.

Phorusrhacos is a super rare Savannah creature unlocked in the game by beating its battle event. Once unlocked, it can be purchased in the Creature Market for DNA 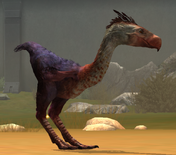 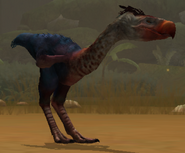 Level 21-30 Phorusrhacos
Add a photo to this gallery

Retrieved from "https://jurassic-world-the-moblie-game.fandom.com/wiki/Phorusrhacos?oldid=9220"
Community content is available under CC-BY-SA unless otherwise noted.