Spinosaurus is a genus of theropod dinosaur that lived in what now is North Africa, during the lower Albian to lower Cenomanian stages of the Cretaceous period, about 95 million years ago. It is currently the longest theropod to have ever existed, at 50 feet in length, 13 feet in height, and 6.8 tonnes in weight.

Spinosaurus is the second super rare carnivore, and can be unlocked at Battle Stage 25. A level 40 Spinosaurus can be fused with a level 40 Utahraptor to create Spinoraptor. Once unlocked, it can be purchased for 1500 DNA.

Because the Spinosaurus can not easily be obtained from anywhere but the market, you should invest some DNA for this dinosaur. This dinosaur can help you a lot towards the end of early game all the way to mid game. But, even in late game, he will not be useless because of his ability to be fused into Spinoraptor. 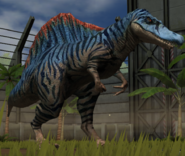 Spinosaurus in the Hatchery

Spinosaurus vs Tyrannosaurus in Battle Stage 19

Spinosaurus in the Dino Market

Brawlasaur Version
Add a photo to this gallery

Retrieved from "https://jurassic-world-the-moblie-game.fandom.com/wiki/Spinosaurus?oldid=10353"
Community content is available under CC-BY-SA unless otherwise noted.