Tyrannosaurus is a genus of coelurosaurian theropod Dinosaur that lived in North America during the Late Cretaceous period about 69-66 million years ago. The species Tyrannosaurus rex, commonly abbreviated to T. rex, is one of the most well-represented of the large theropods. For a time, it was considered to be the largest theropod Dinosaur, at 39 feet in length, 14 feet in height, and 6.5 tonnes in weight. Today, it ranks as the seventh largest theropod, and its title was taken by Spinosaurus. Despite this, it is still commonly considered to be one of the deadliest predators of all time, and its hunting abilities have made it the most popular dinosaur in history.

The Tyrannosaurus is the first Legendary Dinosaur unlocked, at Battle Stage 19. Unlike most dinosaurs that are fought, the Tyrannosaurus does not appear with other creatures, but rather in the form of three of them. It can be fused with a lvl. 40 Velociraptor to become an Indominus Rex. 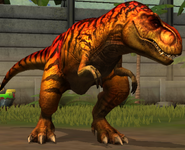 Tyrannosaurus in the Hatchery

Add a photo to this gallery

Retrieved from "https://jurassic-world-the-moblie-game.fandom.com/wiki/Tyrannosaurus_rex?oldid=12083"
Community content is available under CC-BY-SA unless otherwise noted.